should i finish it, na?

Chop. Chop. Chop. Went the knives on that cold June night. The tongues were sharper than the blades that chopped onions, potatoes, carrots, pumpkins.

It was the night before the burial of Ous’ Mapaseka. It was the night vigil and the neighbourhood women had come to help the family prepare for the burial the next day. They stood around a table heavily laden with all sorts of veggies. A fire was to the side; a trifoot gigantic pot cooked a stew from the freshly slaughtered cow. Another giant pot boiled samp. The women watched over them. The work flowed and the conversation was thrilling.

“I heard it was the three letters,” said one woman, gesturing with her three figures.
“Apparently,” started another.
“Allegedly, tsala,” yet another quipped mischievously.
“I-delivery ifike ngohubby.”

The ohhs, grimaces and winces that followed showed much disapproval. The disgust propelled the hands to chop even faster. One of the women, a cousin of the very late Mapaseka sucked her teeth in disgust. She had hardly spoken since arriving and joining the chopping squad. The neighbourhood women didn’t know her so they paid her no mind. The gossip swirled. The hands chopped faster. There was a momentary silence as each woman wondered what kind of diseases their own husbands possibly delivered to them.

Ous’ Mapaseka’s cousin clucked her tongue and sucked her teeth. Shaking her head, her unuttered disgust seemed to support the neighbourhood women’s disapproval. They hmm’d, hawu’d, rha’d and exclaimed in sisterly unison.

Ous’ Mapaseka’s cousin didn’t say a word. She wasn’t going to. She knew a lot more than what the village grapevine guessed. She wasn’t going to say a word. She shook her head as if to communicate to the other women that they were not going to get a word out of her. But the other women took it to mean that she disapproved of the way that Ous’ Mapaseka’s life had turned out. The chop squad sisterhood was in solidarity with poor Ous’ Mapaseka.

Ous’ Mapaseka was a true nineties lady. Born in the eighties and raised the roof in the nineties as she would say. Even in the two thousands she would rock a kangol hat and pepe jeans tightly squeezed with a belt around her tiny waist. She always looked even hipper than the hippest of hip. The daughter of a priest. You know what they say about the children of a priest. Wilder than any child raised by a shebeen queen. But Ous Mapaseka did mend her ways. This is why her death was of such interest to the entire neighbourhood. It fired up the village grapevine. More neighbourhood women had showed up to lend a hand and help the family mourn. Well, they wanted to confirm the various bits and pieces of rumours they had heard in the week since Ous’ Mapaseka’s death. And there were so many contradictory pieces of information about the demise of the very lovely Ous Mapaseka…

She woke up one morning. Found he was gone. A note on the mirror, “Decided to fade to black.” Written in blood. 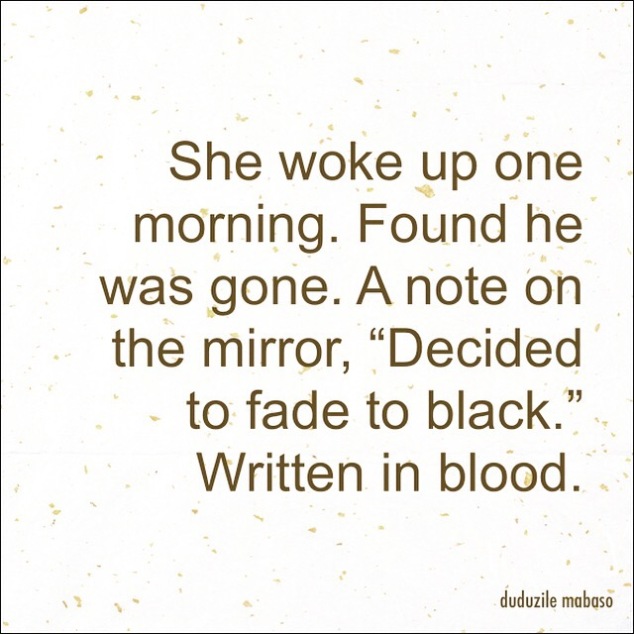 because actually i love and enjoy working.

what i hate is how other people thrive on making work a miserable experience. they can’t bear the thought that excellence can be collaborative and doesn’t have to be micromanaged by them or because they fear excellence and are addicted to mediocrity…

i work because there’s inspiration everywhere and stories don’t have business hours or holidays. because time, in my life, is continuous. because stories are infinite and i’m building something that includes a hundred year legacy…

“Make up a story… For our sake and yours forget your name in the street; tell us what the world has been to you in the dark places and in the light. Don’t tell us what to believe, what to fear. Show us belief’s wide skirt and the stitch that unravels fear’s caul.”

something let misery in
let the doom become unbearable
took over pulled under the
light submerged
into a gloom
and there was no rising
something died
a light went out
into darkness the spirit was plunged
there was no night vigil
the mourners did not know
what they had lost
i have finally had the chance to think about this little story challenge i set for myself. this is what i know so far: END_OF_DOCUMENT_TOKEN_TO_BE_REPLACED

so went one of my status updates this afternoon. spent the afternoon trying to finish a rewrite on the storyline that i’ve been working on. END_OF_DOCUMENT_TOKEN_TO_BE_REPLACED

writing life is a lonely life. writers are used to working alone, in the night… i certainly am. i prefer it but since i make my butter working in the tv industry i have to work with others. these writers’ meetings are minimal coz everybody knows we hate meetings. but this year, i’ve been in the writer’s room almost every single day and it has taken a toll on my sanity. END_OF_DOCUMENT_TOKEN_TO_BE_REPLACED