the new Iron Man being a black teenage girl would make me happy, if i didn’t know that its main effect will be to shut out original black characters created by independent black creatives. it’s like a cultural gentrification of sorts (or maybe blackface is more appropriate). whenever they blackify originally white fiction characters. it keeps the creative kudos and the money firmly in the pockets of the establishment. we don’t notice coz we think it’s simply about representation of black and brown faces in visual media. but its not.

making a white superhero black is, in fact, cultural and creative thievery. black artists started to turn these fictional characters black. because we reacted positively and wanted to put money in our black artists’ hands, big business jumped in.

there was never an active interest or intention to create a black barbie or spidey or iron man until black artists tested the market. black artists were doing cultural work and inadvertently (some consciosly and deliberately) proving there’s a financial demand. now big biz with all its resources jumps on the bandwagon and takes what the black artists worked so hard to build.

because we’re already inclined to spend on established mainstream, we just start celebrating. we think, “yay they finally see we’re people too”. they finally see that black superheroes are bankable. then we forget all about the black artists who don’t have the financial juice as yet to launch their own film franchises or comic series or black doll line. and if they have launched then and have been chugging along for years trying to survive from sale to sale, with a nonexistent marketing and distribution budget, waiting for that big break…

then the big break finally comes but it’s for Marvel and Martel and the same establishment!

then our artists are back to square one. either they continue being small fry or they and go work for the establishment. and we’re all back to square one where the little representation we have is dodgy AF and not controlled by us!

for reals, what are we celebrating?

after a week of higher anxiety and not answering phones, the phone rings.

this person is calling for the umpteenth time. i answer.

“oh, i’ve been calling and you weren’t answering. i thought maybe you’re angry with me.”

but what i should say is: i don’t do well with phone calls. they make me anxious. so sometimes i let them go to voicemail and hope the caller will leave a message, or better yet will write an SMS or email me. i do better with written communication. with written communication, i don’t feel the pressure to be normal, available, cheerful, interested, have answers, have the right answers, not get triggered, or have the acceptable or expected mood. if offended by sms or email i don’t have to react at the same time, i can process it then respond with the right tone (be it vexed or calm).

i hung up on another person on Saturday. he called twice. i felt anxious so i didn’t answer. this caller is always draining. he rang a third time so i counted to ten then answered. still feeling anxious.

“so you don’t want to answer my calls!”

and thank the dodgy cell network his, all caps rude entitled message didn’t get through until hours later. told him he was rude.

so phone calls, like people, are draining. rude people who don’t get it even more.

what i wanted to say to him was that he’s draining. i know if i had stayed on the call, it would’ve gotten ugly because with some people, no matter how you’re explain it, you either come across as weird “o snaaks” or as insulting, as if you’re saying it is them who are draining, rather than as an introvert, being around some people is draining.

so i don’t answer most phone calls. some times, no calls.

featured image from The Awesome Daily

1. i built it meself when i chose this writing thing then mixed it up with multiple formats

there is no number 2, just a conflict lave/hate feelings that make it hard to be more sociable. bad enough i’m an incurable introvert, now i’m a recluse. something i’ve been trying to be less off.

but i gotta write.

will the world still look the same when i eventually go outside?

i’m having one of those days when humaning feels futile. when waking up, doing working, making the bed, bathing, answering the phone feels like a lie. like humaning is just being a hamster on a wheel.

and thinking and feeling is heavy.

and breathing and being is heavy.

and there’s no answer to “why” that will be satisfying. so i trudge along. this breathing in and breathing out thing seems to run automatically. so i’m waiting for a day like yesterday when the race didn’t feet so ratty.

don’t ever stop moving… once you lose momentum it’s so hard to get going again. so even if you have to slow down because you have too much work, or not enough energy or resources, don’t stop moving. slow down when necessary. but keep moving.

“I am afraid,” she spoke the truth back to herself hoping that someone would hear her and tell her it was a lie. But she was alone in the room. Just her and her fears and a glimpse of a fearless self struggling to breathe. The fearless self cowered in the corner waiting to be rescued. A little light blinking where its heart beat. Waiting for her to wake up to that fact that she needed to fight her fears with fearlessness. She couldn’t remember ever being fearless, so she didn’t do anything. She found herself a corner, laid down and waited to be rescued.

It didn’t survive long, her fearless self. It whimpered and faded into the darkness as she closed her eyes and let her fears merge into her. When she opened her eyes, it was dark. She drowned.

to not shift is to die

but not dying is pain

that’s why it hurts

should i finish it, na?

Chop. Chop. Chop. Went the knives on that cold June night. The tongues were sharper than the blades that chopped onions, potatoes, carrots, pumpkins.

It was the night before the burial of Ous’ Mapaseka. It was the night vigil and the neighbourhood women had come to help the family prepare for the burial the next day. They stood around a table heavily laden with all sorts of veggies. A fire was to the side; a trifoot gigantic pot cooked a stew from the freshly slaughtered cow. Another giant pot boiled samp. The women watched over them. The work flowed and the conversation was thrilling.

“I heard it was the three letters,” said one woman, gesturing with her three figures.
“Apparently,” started another.
“Allegedly, tsala,” yet another quipped mischievously.
“I-delivery ifike ngohubby.”

The ohhs, grimaces and winces that followed showed much disapproval. The disgust propelled the hands to chop even faster. One of the women, a cousin of the very late Mapaseka sucked her teeth in disgust. She had hardly spoken since arriving and joining the chopping squad. The neighbourhood women didn’t know her so they paid her no mind. The gossip swirled. The hands chopped faster. There was a momentary silence as each woman wondered what kind of diseases their own husbands possibly delivered to them.

Ous’ Mapaseka’s cousin clucked her tongue and sucked her teeth. Shaking her head, her unuttered disgust seemed to support the neighbourhood women’s disapproval. They hmm’d, hawu’d, rha’d and exclaimed in sisterly unison.

Ous’ Mapaseka’s cousin didn’t say a word. She wasn’t going to. She knew a lot more than what the village grapevine guessed. She wasn’t going to say a word. She shook her head as if to communicate to the other women that they were not going to get a word out of her. But the other women took it to mean that she disapproved of the way that Ous’ Mapaseka’s life had turned out. The chop squad sisterhood was in solidarity with poor Ous’ Mapaseka.

Ous’ Mapaseka was a true nineties lady. Born in the eighties and raised the roof in the nineties as she would say. Even in the two thousands she would rock a kangol hat and pepe jeans tightly squeezed with a belt around her tiny waist. She always looked even hipper than the hippest of hip. The daughter of a priest. You know what they say about the children of a priest. Wilder than any child raised by a shebeen queen. But Ous Mapaseka did mend her ways. This is why her death was of such interest to the entire neighbourhood. It fired up the village grapevine. More neighbourhood women had showed up to lend a hand and help the family mourn. Well, they wanted to confirm the various bits and pieces of rumours they had heard in the week since Ous’ Mapaseka’s death. And there were so many contradictory pieces of information about the demise of the very lovely Ous Mapaseka…

once upon a full moon i attempted a haiku… 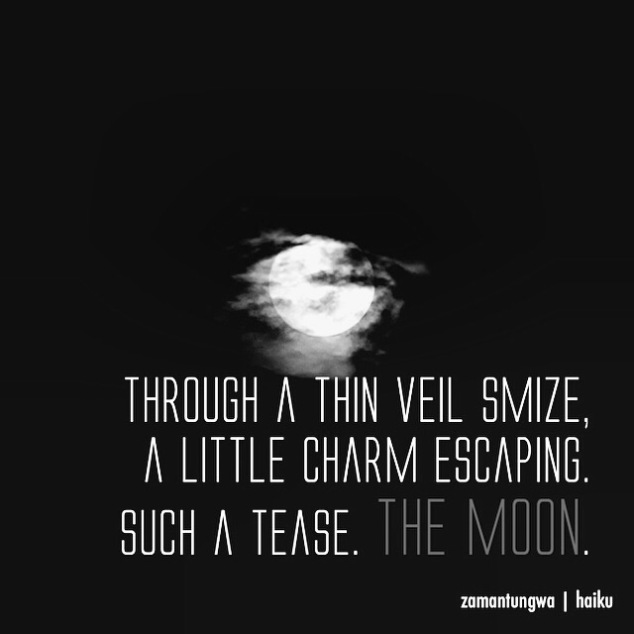 through a thin veil smize,
a little charm escaping.
such a tease. the moon

“Indecision may or may not be my problem.”
Jimmy Buffett